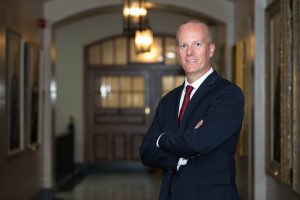 Professor Edward (Ted) Sargent was appointed Vice-President, International of the University of Toronto in June, 2016.

Professor Sargent is a distinguished researcher and holds the rank of University Professor in the Edward S. Rogers Sr. Department of Electrical and Computer Engineering at the University of Toronto. He also holds the Canada Research Chair in Nanotechnology.

He is founder and CTO of InVisage Technologies and a co-founder of Xagenic.

Professor Sargent’s research interests cover many areas of nanotechnology and its application to communications and computing, medicine, and tapping new energy sources. His research has been cited more than 16,000 times and has been disseminated in Nature, Science, Nature Materials, Nature Nanotechnology, Nature Chemistry and Nature Photonics. His book The Dance of Molecules: How Nanotechnology is Changing Our Lives (Penguin) was published in Canada and the United States in 2005 and has been translated into French, Spanish, Italian, Korean, and Arabic.

Professor Sargent is a Fellow of the Royal Society of Canada; a Fellow of the American Association for the Advancement of Science “…for distinguished contributions to the development of solar cells and light sensors based on solution-processed semiconductors;” and a Fellow of the Institute of Electrical and Electronics Engineers “…for contributions to collodial quantum dot optoelectronic devices.” He is Fellow of the Canadian Academy of Engineering for “…ground-breaking research in nanotechnology, applying novel quantum-tuned materials to the realization of full-spectrum solar cells and ultra sensitive light detectors.” The impact of his work has been felt in industry through his formation of two start-up companies.